Did the Internet Become A Safer Place? WhatsApp Turned on End-to-end Encryption 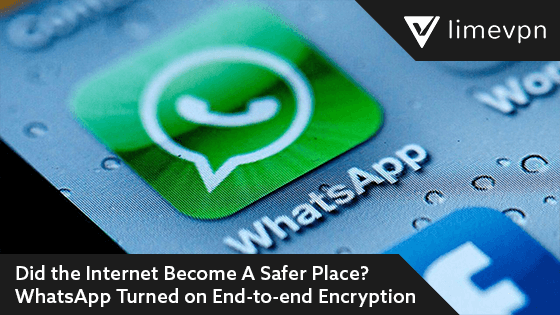 The joyful news came recently from the people who made WhatsApp. According to Brian Acton and Jan Koum, the two young men responsible for the creation of WhatsApp, the application is now encrypted fully with the so-called end-to-end encryption. This was indeed a step forward, considering the fact that they have been working on it for almost a year and a half. As a matter of fact, the encryption itself began in late 2014 when people were able to send encrypted texts via the app. However, nowadays this encryption is also available for other means of communication such as calls or video calls.

1. What exactly does end-to-end encryption stand for?

2. How does the government see this action of WhatsApp?

Brian and Jan joined forces with an anonymous programmer and cryptographer who represent himself on the internet as Moxie Marlinspike. The result of this unusual cooperation was end-to-end encryption on their application, which is now mostly owned by Facebook.

What exactly does end-to-end encryption stand for?

The name “end-to-end“ (E2EE) is a special form of encrypted communication where the people involved in conversation are the only ones who can access and read the messages. Basically, the whole conversation will be scrambled (with a Public key) and will require a key (Private key) to get the unscrambled conversation which means no one will be able to access the information  and that includes even the internet providers and the company of the application itself. In other words, no third party can get involved in your communication, whether it is a text message, phone call, and video call or even a group call. 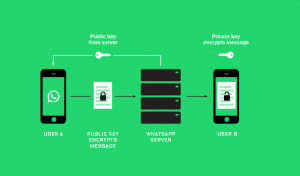 This new system of encryption is integrated in such a manner that the system will not allow the users to send unencrypted messages once they mark them as encrypted. Furthermore, they will be given a warning that those unencrypted messages may be a subject to various attacks. If you, perhaps, use a VPN, there will be a whole new level of encryption which will double-protect you.

How does the government see this action of WhatsApp?

On the other hand, the question of general safety not only on WhatsApp but also on the whole Internet still remains unanswered. The organizations such as FBI and Justice Department are, in fact, strongly opposed to such means of encryption due to the fact that it means they will now have a limited access to the information as well. As a matter of fact, FBI and Apple recently entered a quarrel over the whole security issue when FBI accessed the confidential data of an iPhone in an unconstitutional way.

In other words, the government sees this as giving the terrorists the opportunity to communicate freely where no one will be able to intercept their communication and put an end to a potential disaster.

WhatsApp is now considered the most popular messaging application with a billion users currently actively using it. Apart from the text messages, the application is also very reliable when it comes to calls, video calls and even group calls. The question, however, still remains – is this move by Brian and Jan a checkmate against various hackers and even the government, or is it merely a stalemate?